Here in the Intermountain West we get a winter weather phenomenon called a temperature inversion.  It is when cold air is trapped in the valleys by a cap of warmer air. This inversion causes lower temperatures in the valley floor while the high elevations are relatively warmer.

We have been having an inversion for the past week. The sky is clear and cloudless but the temperatures are really cold. At my house, which is up the side of a mountain, the air temp this afternoon is 17 degrees F, but down in the valley it is 6 degrees F.

Not wanting to waste a beautiful day, and not being a skier, I decided to hit the river despite the cold temps. When I arrived at the river side it was 3 degrees F! Still, I decided to fish a little and test some equipment. 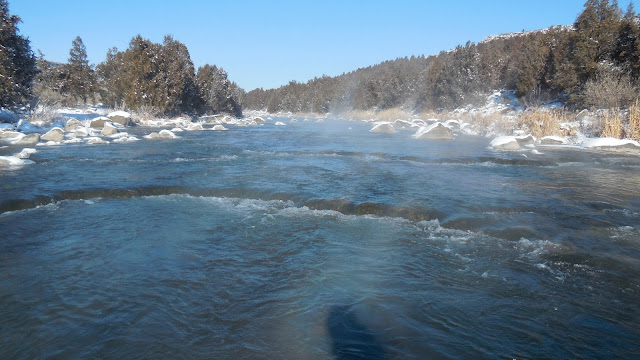 I don't know what the water temperature was, because I left my thermometer at home, but the springs upstream kept the water clear of ice except at the edges. A fine mist was rising making fishing an ethereal experience. 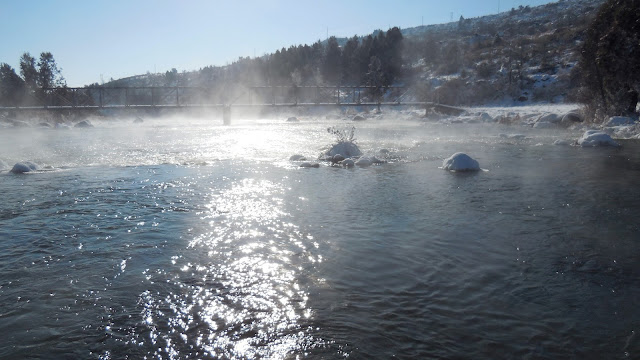 There was no surface activity from the fish. Usually they are taking midges or BWO this time of day, but not today. Maybe the bugs know its too cold to emerge!? So, I decided to fish a beadhead Prince Nymph to see if I could dredge them up from the holes in the rock and weed.

One of the things I like about tenkara in the winter is that since the line is off the water there is very little icing of your line. For fishing when the air temperature is below 32 F I think a fluorocarbon level line is much better than a furled line mainly for the fact that the level line doesn't accumulate as much water. A furled line would have frozen stiff today, even with application of Stanley's Ice Off.

I fished for only an hour and a half, and in that time I took a few 10 inch rainbows. I had no issue with my rod breaking (I was curious to see if these cold temps would make the carbon fiber too brittle), but my net froze stiff when lifting the trout out of the water. I didn't handle the fish, to keep my hands warm, and I got the fish right back in the water. 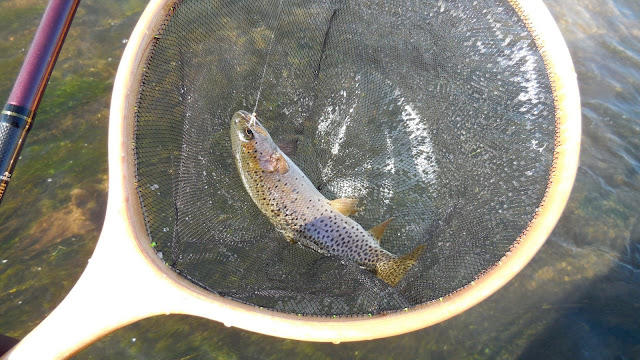 The water was a little off color and cloudy and this may have put the fish off as well. Those fish that I caught were still pretty fun. 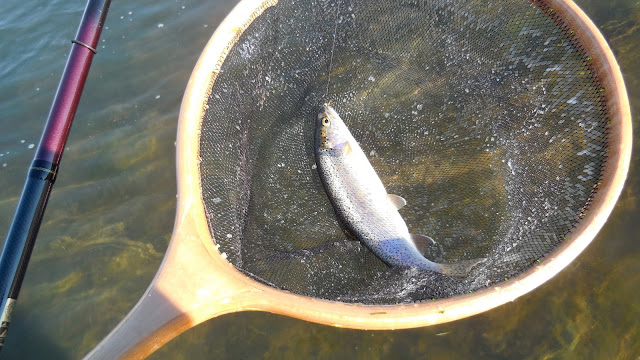 I'd like it to warm up a bit before my next outing, but if it doesn't it won't stop me. Gotta fish! Next week it is forecast to warm up to 35 F -- balmy!