One of the things about tenkara that makes us boast (catchy sayings, bumper stickers, blog posts) is that we don't use a reel. We feel that we can control the fly better than fly fishing with rod and reel. We feel unburdened not having to buy a reel, not having all that line getting caught around our legs in the stream, not having to feel like we need to cast 60 feet to catch trout, not having to double-haul to be a man (or women). But you know what? We still have to control our line somehow!

Various methods of line control have been tried and re-tried. These range from one-the-rod line control (EZ-keepers or variations there of), spools (commercial, homemade, large ones, small ones, custom-made works-of-art ones, etc), bamboo or wooden rectangular "spools", even "through the rod" line control options. I have played with most of them (not the "through the rod" option), and I have come to the conclusion that for me I'll take the spool.

I have used a variety of spools, all commercially made and available, for my line control. I have decided that for me, when I want to collapse my rod and either keep the line attached to the rod, or remove the line for storage, that a spool works the best. You may not agree, and that is OK. I just never really liked the other methods of line control. Either they were cumbersome, or added things to the rod that get in the way, or impractical, or kinked the line, or whatever. After trying every other method I have gravitated back to spools, and I think, at least for the foreseeable future, that is where I'll stay. 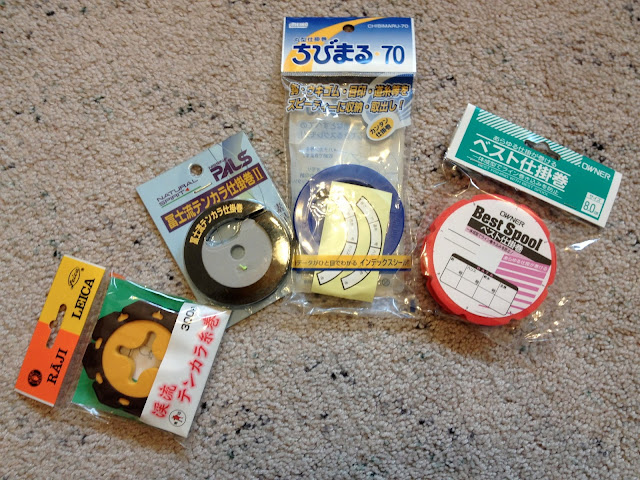 Just the other day I received four examples of tenkara line spools from Oleg Stryapunin at Tenkara Times. I have previously used two of the four. Here they are with pros and cons:


The Owner Best Spool is the largest of the samples. It is entirely made of foam and thus is extraordinarily light. One side has a large adhesive sticker that has places to denote the line which is on the spool as well as the flies.  Around the outside rim of the sticker are the numbers 1 through 8. This could be used for where individual flies attached to the line, or if you had more than one line on the spool.  Flies can be easily hooked into the foam to control them. This is great for Czech nymphing or Pesca alla Valsesiana rigs, since multiple flies are used.

The central hole is a bit on the small size but it is large enough to slide over most tenkara rods. The spool just won't slide very far down the rod. I'm not quite sure what the second, smaller, hole is for. I used a blade to open the central hole by cutting out the overlying label.

This is a nice spool for long lines. Since it is so large, it only takes a few wraps of the line to get it all on the spool! It is 80 mm in diameter and weighs 4.5 gm. You can wind the line on clock-wise or counter clock-wise. 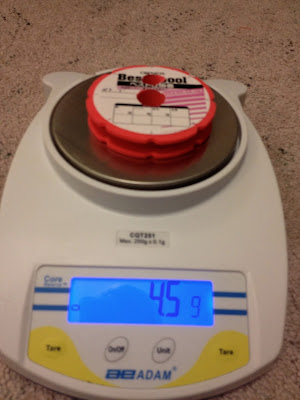 If you are a backpacker, fish with multiple flies on your line, or use long lines for still waters, then you might be interested in this spool. It's so light that it won't weigh you down, and long lines go on in just a few quick wraps. 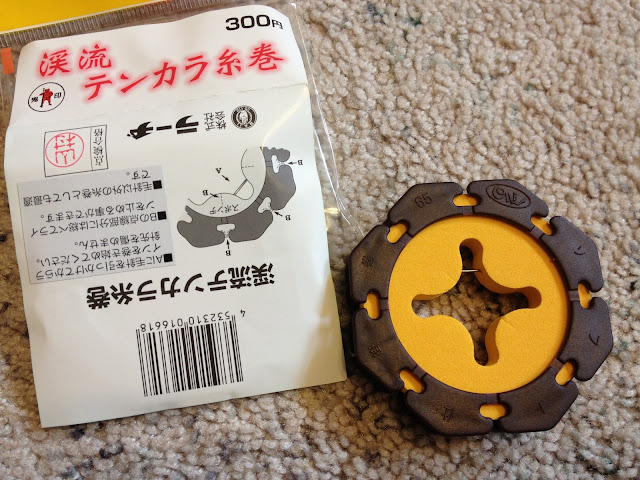 I have used this spool for over a year and have found it to be the most functional spool for me. It is lightweight foam with plastic rims which are notched so to provide a place to "capture" the lilian end of the line. This capture doesn't always hold so when I want a more secure grip I will pinch the line into one of the four provided slots in the foam as well. This makes a very secure way of controlling the line.

The central hole is large enough to fit over many rods but not keiryu rods with a large shaft diameter such as my Daiwa Kiyose 43 M-F and Shimano Kozuka 39NT. It is large enough to allow your finger to aid in winding the line on however.

The spool is 70 mm in diameter and weighs 12.6 gm. You can wind the line on clock-wise or counter clock-wise. 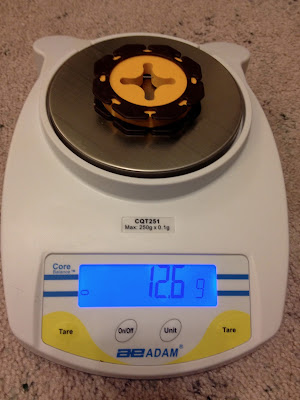 As you can see, there is a metal bar for anchoring your fly. All in all, this is a very nicely made, functional, and convenient way of line transport or storage. 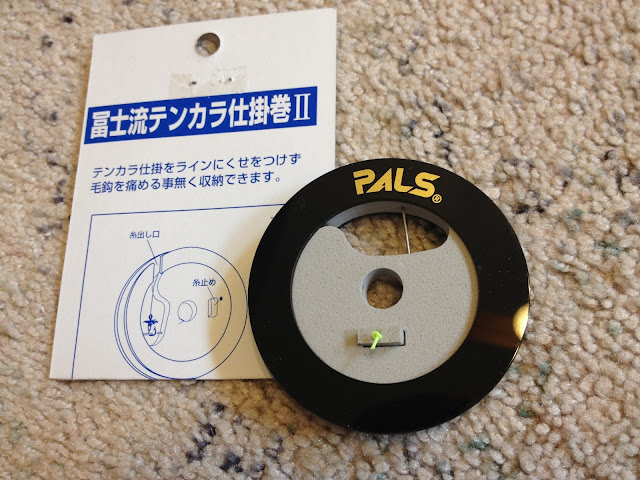 The spool was designed by Mr. Hiromichi Fuji, a tenkara master who has designed rods for Nissin. It is 65 mm in diameter and weight 9.2 gm. 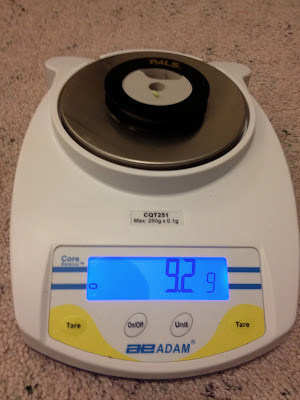 It has a generous space with a hook bar for your fly. The line has to be wound on in a clock-wise direction only.

Due to its unique design, there is only one way to secure the end of the line. After the line has been wound on, bring the end of the line through the provided slot in the plastic rim and angle it towards the rectangular foam cut-out. Pull out the little foam plug, slip your line end through and replace the foam plug. This makes a very secure way of transporting and storing your line. 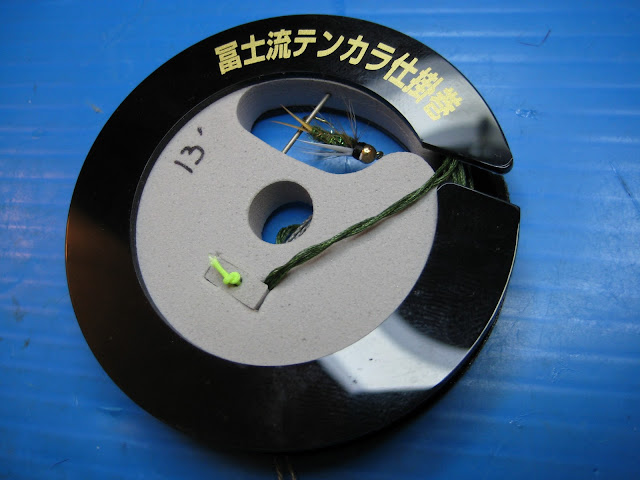 The central hole is rather small making it a little for cumbersome to wind on the line. Also, due to its small size, the spool will only fit onto the shaft of the thinnest of tenkara rods. I suspect that this spool was not designed for "on the rod" transport. Really that is no big deal. It's a little different from the other spools but its unique design more than makes up for this difference. 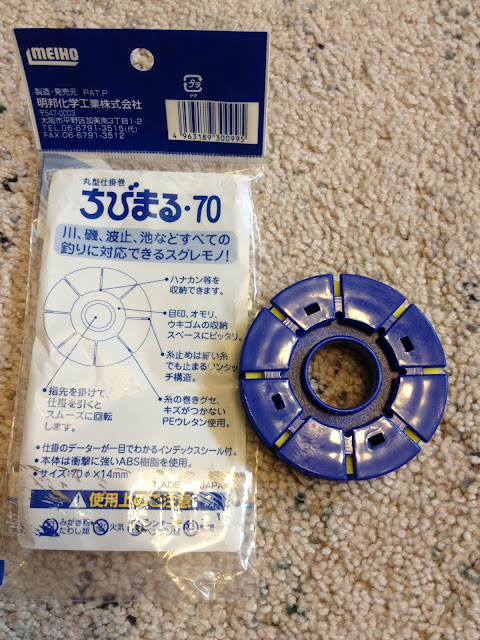 Meiho line holders are very familiar to most US tenkara fishers. These are commonly sold by tenkara vendors and seems to be one of the most popular spool out there. It easily is wound since the central hole is large enough the accommodate any size finger. The spool also easily fits almost any rod, tenkara or keiryu or seiryu, so that the line may remain attached to the rod's lilian while transporting.


This too is a foam spool with plastic rims. It also has multiple slots so the your line may be secured in multiple different ways. Flies may be secured by hooking into one of the small rectangular slots provided, or by hooking into the foam. Small flies work best in the slots and large flies work best by securing into the foam. 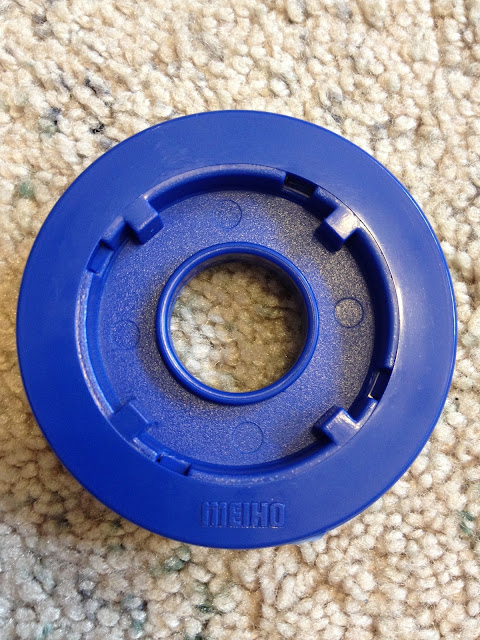 This is a very functional spool at any size. Many people prefer these and I freely admit that I use mine all the time! 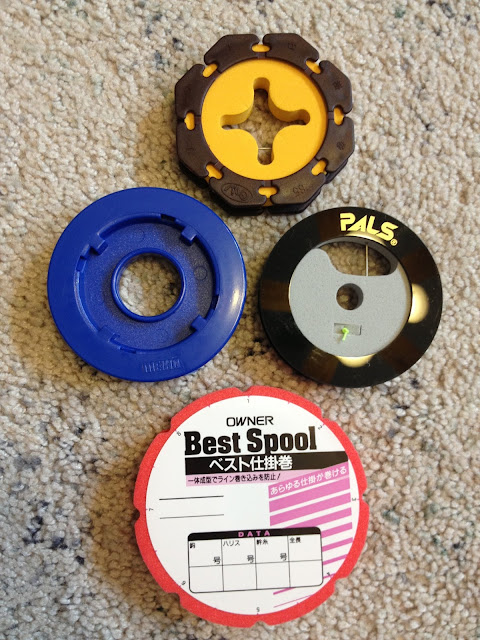 So there your have it. These are the spools available from Tenkara Times store. All of them are useful and it pretty much depends on what you want out of a spool. Of course, you can make your own spools out of foam, plastic, wood, bamboo, and even moose antler. You can even recycle your old tippet spools into line holders or just use some small plastic baggies. But, if you are not so inclined, then one of these spools is surely to work for your situation!

Yes, you have to straighten the spool-induced curves or spirals in a level line, but the newer lines straighten with just a slight tug so these line curves are not an issue anymore. Also, a few subtle curves in the distal line, just proximal to the line-tippet knot, make a great strike detector! I think a lot of you have already figured this out!