As you are aware, Tenkara USA recently released two new rods. One of them was the Sato, a triple-zoom tenkara rod that is very impressive.  It, however, is not the only triple-zoom rod that I have fished. I've fished a few. Some I liked more than others.

I have had, and fished, the Suntech Field Master 39 Keiryu Special and the Suntech Suikei GM 39. I ended up selling the Field Master but I still have the Suikei. I really like this rod. I have taken it places and it has never let me down. So, I thought it would be interesting to fish the Suikei and the Sato side by side and do a comparison of features, actions, balance, and on-the-water performance. Today I went to the stream with that intent.

It was a bad day. I walked just under a mile in heavy snow, fell down (more like slid down) one hundred feet from trail to rivers edge (fortunately I didn't trigger an avalanche). Once I got in the water I found that I had brought the wrong fly box, not my tenkara box! I was carrying my tailwater box, of all things!

Still, I was in the water and I wanted to test the rods. Right flies or not, I was going to fish! 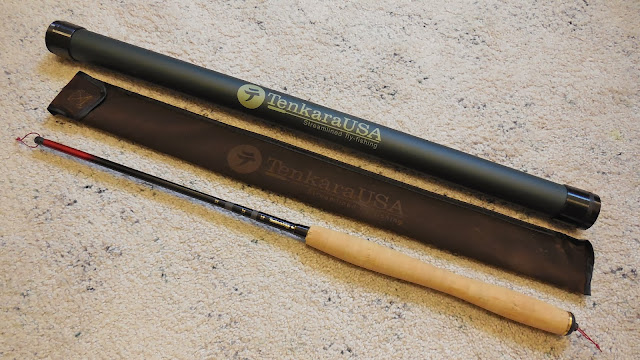 What more can I say about this rod than I said in my comprehensive review. This is a rod designed for tenkara that allows the fisher to fish at three different lengths, 330, 306, 390. These are supposed to be designated lengths in centimeters but the Sato is short of these advertised length at all three stations. At 390 the rod is 378 cm, at 360 it is 352 cm, and at 330 it is 326 cm. The Sato comes with a TUSA rods tube and sleeve of very good to excellent quality. The rod has a cork handle which has a very nice ergonomic shape. This allows the user to hold the rod in a variety of different positions yet use the rod very effectively. The finish is glossy black with red accents. The rod is light weight, coming in at 74 gm. Its action is relaxed in all positions, but it does get just a little softer as you extend it out.  The Sato has a Common Cents System (CCS) value of 21 pennies at 390 cm, 20 pennies at 360 cm, and 19 pennies and 330 cm. This gives it a Rod Flex Index (RFI) of 5.4, 5.5, and 5.7 for 390, 360 and 330 cm respectively. These number put the Sato in the 6:4 action range, but on the slower end. As far as balance, the moment calculations predict that the Sato will feel slightly tip heavy in its 390 configuration, but not by much. The moment numbers are 5.96 at 390, 5.03 at 360, and 4.14 at 330. Anything more than 5.5 will feel tip heavy. The Sato comes with two tip plugs and a place to store one plug in the butt cap. The zoom feature is comprised of a butt cap post with O-rings and friction tape on each of the zoomable sections. The Sato costs $215.00 USD. The Sato has the famous Tenkara USA warranty, support and parts. 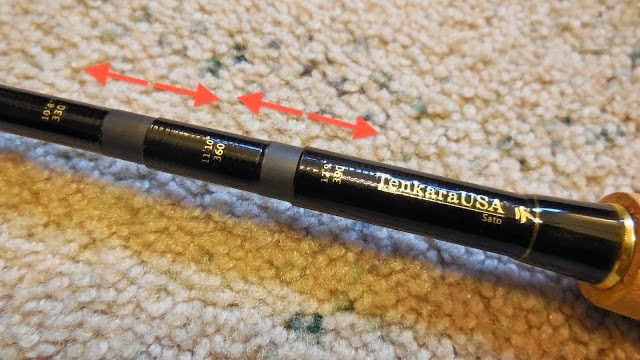 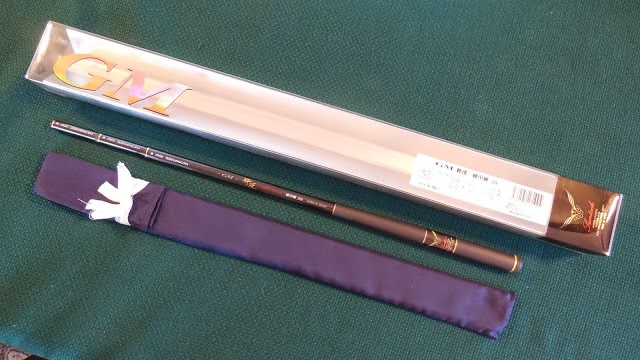 This rod is a keiryu rod that is also triple-zoom. I reviewed it in the past. There are two different versions of the Suikei, medium 硬中硬 and stiff 硬調. Mine is the medium version; I have no experience with the stiff version. This rod can be fished at 320, 360 and 390 cm. Like the TUSA Sato there are some discrepancies of the measured lengths versus the advertised lengths -- but the Suikei is much truer to what is advertised. My Suikei is 392 cm at 390, 358.5 cm at 360 and 318 cm at 320. These are tighter tolerance than seen with the Sato. The Suikei comes with a good quality rod sleeve and a plastic carton, but no rod tube is provided. The rod is cork-less. The handle has a thin non-slip coating that is very effective wet or dry. Because there is no cork, the handle may feel very narrow to many users. I have applied a Head Hydrosorb wrap to mine, so to increase the handle diameter. The rod's finish is a glossy dark charcoal with metallic flecks. The rod is lightweight at 60.5 g. Mine now weighs 70 g with the added handle wrap. Its action is quick with great recovery and no oscillation. It feels the same in all three length configurations. The Suikei has a CCS of 21.5 for 390, 21 for 360, and 18 for 320 cm. This gives it a RFI of 5.5, 5.8 and 5.8 for 390, 360, and 320 cm respectively. These numbers put the Suikei in the 6:4 action range. As far as balance, the moment calculations predict that the Suikei will feel slightly tip heavy in its 390 configuration like the Sato, but not by much. The moment numbers are 6.2 at 390, 4.93 at 360, and 3.84 at 320. The Suikei comes with a universal tip cap rather than a standard tip plug. The zoom feature is comprised of a butt cap post with O-rings and friction tape on each of the zoomable section, similar to the Sato. The Suikei costs $190.00 USD. The Suikei has no warranty, but excellent support and replacement parts are easily obtained through Tenkara Bum.

The most obvious difference is that the Sato (tenkara rod) has a cork handle and the Suikei (keiryu rod) does not. While the Suikei fishes just fine, and is much lighter than the Sato, without a handle wrap, I decided to add one. This is just a personal preference and doesn't reflect the need for one at all. Both are handsome rods. Both employ the same mechanism for zooming. The Suikei has a micro-swivel for attaching the lilian, while the lilian is attached directly on the Sato.

There are length differences. The Suikei is more true to the advertised lengths. See images.

These two rods are both wonderful for what they are designed to do. Even though one is a tenkara rod and the other a keiryu rod, they feel quite similar. The Sato however, has a slightly softer or fuller flex feel when casting. It loads a little quicker and more effortlessly, but it doesn't tolerate a heavy line or fly like the Suikei will. The Suikei will tolerate a beadhead fly without issue, while the Sato complains a little bit. The Suikei casts a furled line better, while the Sato is best with a light level line.

Balance is comparable. Both rods are very slightly tip heavy at full 390 extension but not at all in the shorter two configurations. The Suikei is much lighter (without wrap) than the Sato. 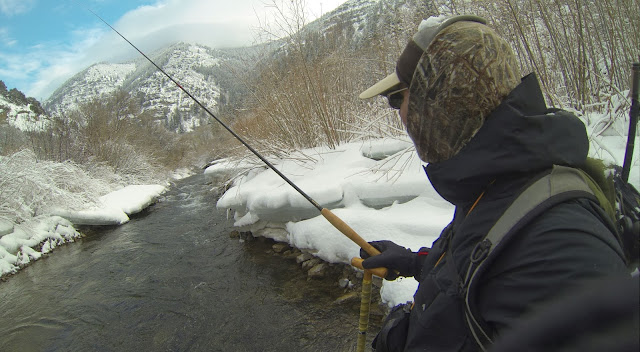 I fished both rods on the same day, same water, same line, same fly. I went with a 10.5 foot #4 fluorocarbon level line with 2.5 feet of 5X tippet. The water I fished was iced in and therefore a long line was inappropriate. Because I had the wrong fly box with me I couldn't use a standard kebari, but rather I had to use smaller nymphs designed for tailwaters not mountain streams. I fished a #16 beadhead pheasant tail. When I lost the pheasant tail I went with a #12 Czech nymph of moderate weight. These flies let me feel the rods with both a light fly and heavy fly.

Again, both rods cast very well. The Suikei tolerates a heavier line better than the Sato. This goes for flies as well. The Sato prefers an unweighted or light fly. The Suikei doesn't seem to care. Targeting was spot on with both.

Fighting fish was similar, but since the Suikei is a little stiffer in the lower sections than the Sato it seems to handle fish in faster water a little better. Twelve inch trout were easily controlled in the same current with both rods however. Smaller fish were felt better with the Sato. Strike sensitivity felt the same with both rods.

Which rod do I like best? Both! They may be similar enough to justify getting one or the other, but they each have different personalities and characteristics. I guess it sort of depends on what you want in a multi-zoom rod. If you want one that is less expensive, then the Suikei wins. If you want a rod tube, the Sato. If you are focused on weight, the Suikei. If you want a finesse tenkara rod for unweighted flies, then the Sato. If you want an all-rounder (light flies, heavier flies, heavier line, furled lines), then Suikei.  Personally, I don't think you could go wrong with either rod. BTW, please remember that when I talk about my Suikei I am talking about the medium 硬中硬 version of that rod. 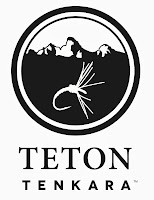