When I decided to get started in Tenkara I obviously needed a rod. Currently, the best resource for Tenkara equipment is Tenkara USA. Tenkara USA not only has equipment, but they also have an instructional blog, forum and videos. Other very useful websites for terminal tackle, reviews, and advise include TenkaraBum, TenkaraTalk, Tenkara on the Fly. So, after reading reviews I decided on the Tenkara USA Iwana 12ft rod. I ordered it and a furled leader and had them in my hands in less than one week. They were packaged well. The rod included a nice rod tube and rod sleeve. The Iwana fit and finish was perfect; high quality cork, excellent finish. I slowly extended it (as I learned how from the video from Tenkara USA) and I was immediately struck by both the length and lightness of the rod! I have been nymphing with 10 foot rods for a few years now, but at 12 feet the Iwana made me gasp! It was a thing of beauty! With such subtle lines it looked more like a carbon fiber modern sculpture than a fly rod.

I have been using furled leaders in western fly fishing for years now so I didn't think twice about the furled leader. That said, it was a nice leader -- subtle green, a tight but pliable weave with no Old Maid free ends sticking out, and a convenient end ring for tippet attachment. Whoever made it knew what they were doing.

Now that I had the rod and leader I just had to give them a go. It was January 2, 2012. The air temperature was balmy 45 degrees. I shot the local convenient store for a 2012 license and then drove to the river. No one was there!  Just the way I like it. I got on my waders, wading staff, and small one box chest pack (also what I have been using for years -- no shoulder pain inducing vest for me). I attached the leader the the Iwana (just like Daniel at Tenkara USA showed me on the videos), added 3 feet of 6x tippet and tied on two nymphs -- Czech style. OK, so not true Tenkara style but hey, I'm new to this remember? 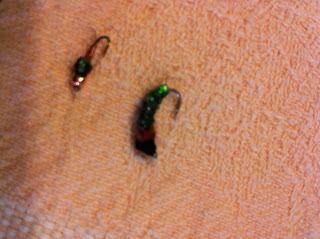 I headed for a stretch of the river where I knew there were fish -- small yet cooperative. The rod cast smoothly and efficiently. I hooked my first fish on the second cast! It was an eight inch rainbow. The fight of the fish was telegraphed to my hand so that I could feel every movement of even this little guy!  Very nice! To make a long story short, I caught and released over 15 fish in one hour!  That was a record for me. The largest was 10 inches (see picture below). Was it the rod? Was it the Tenkara technique of keeping all but the tippet off the water? Was it just a good day with the right flies? Dunno...maybe a little of everything. Needless to say, I was hooked by Tenkara! 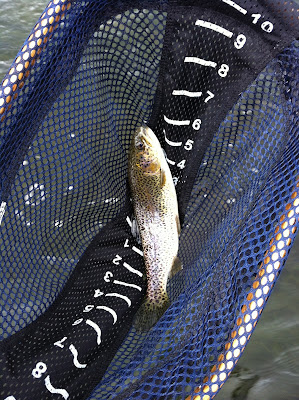 An updated impression of this rod, and other rods I have used can be read HERE.