NOT a Wild and Scenic River!

This past week my wife and I flew to Northwest Arkansas to baby sit the grandkids. Although I have been here many times I have never fished -- I have to do my Grandfather duty like do little projects around their house and help with the kids. But this time my wife encouraged me to bring a rod and buy a fishing license. I decided to acquiesce -- there was very little arm twisting, I can assure you! I packed my Daiwa "Snowy Mountain" 36M 32-36 8:2 zoom rod (I bought it for Euro nymphing since it is has a stiffer action than most tenkara rods). It collapses to only 16 inches so it is perfect for my carry on. I did see a guy on the plane with his long Sage rod case. He barely could find any place for it and almost had to check it into the belly of the plane. I showed him my rod and he looked at me like I was from Mars!! 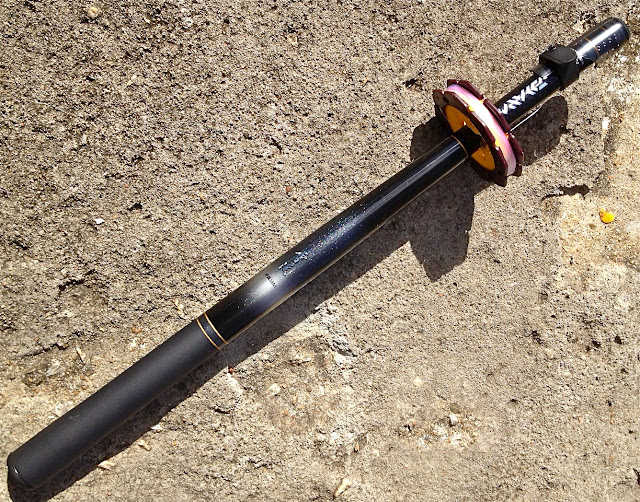 When we arrived I bought a 3 day, non-resident license for $11.00. I did not buy a separate trout permit since I knew that I wouldn't have time to get over to the White River. BTW, the trout permit is $12.00.  Someday I would like to fish the White River, but that will have to wait.

Anyway, I got a few chances to fish some local waters. I pretty much know nothing about warm water species. I know even less about what waters I could fish and what kind of access there was in a state that has mostly private land use. But after some research on the internet I found that I could fish a local river called Little Sugar Creek.

Little Sugar Creek definitely does not have Wild and Scenic River status. It is a spring fed creek that runs from through the southern Ozarks starting near Pea Ridge National Military Park, through a portion of Bentonville and Bella Vista, Arkansas and then north to cross into Missouri. It is surrounded mostly by private land and access can be difficult (like some spots in Idaho) but there is a park in Bella Vista in which the creek passes through. It is dammed and makes Lake Bella Vista. The park is owned and maintained by Bentonville City, therefore the special access and use rules that apply to the other waters of Bella Vista do not apply. I decided to try there.


On Thursday I got to the water at 7 AM. The wind was blowing 15 mph, but with gusts of over 20 mph. It is these types of conditions where I find tenkara frustrating. Since the goal is to keep most of the line off the water, tenkara can be difficult at best when the wind is really blowing -- particularly when the wind is blowing perpendicular to your direction of casting, as was my case. The wind just picks up the line and lifts the fly right out of the water! So, some of the time I was more flying a kite then fishing! To attempt to counter the wind I would lay most of the line onto the water. This, of course, negates all the benefits that tenkara has to offer. Thursday morning I was wishing I had my 4wt western gear instead of my tenkara stuff. Despite the wind, I did catch two fish. I think they were Bluegill.


A cold front came through over night and the temperature dropped from the low 80's F on Thursday afternoon to 38 F Friday morning. I decided to wait until afternoon to try again.

The wind was still blowing but not as briskly as the day before. I fished where the trees were giving me some shelter and casting my 26 foot #5 line was a lot easier then the day prior. My 5th cast I was into a fish. It was just a little guy, but I didn't come here for world record fish. I just wanted to catch some warm water species.


I kept working the #10 sakasa kebari I had on and over the next 20 minutes caught quite a few fish. One was even a small Largemouth bass. 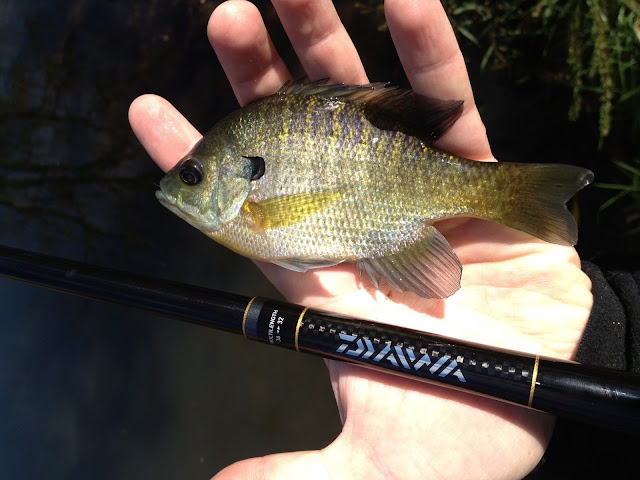 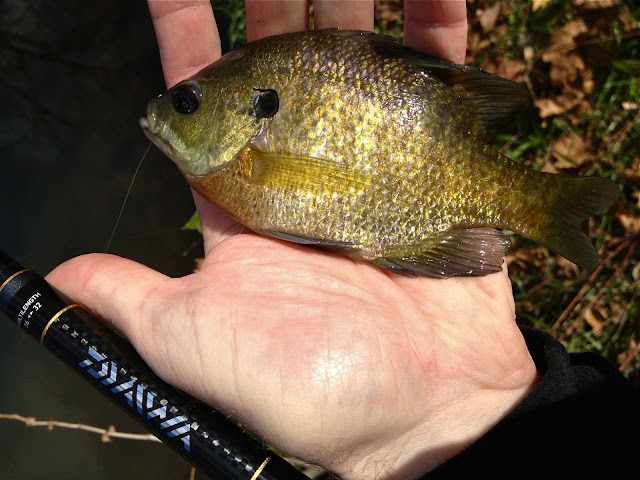 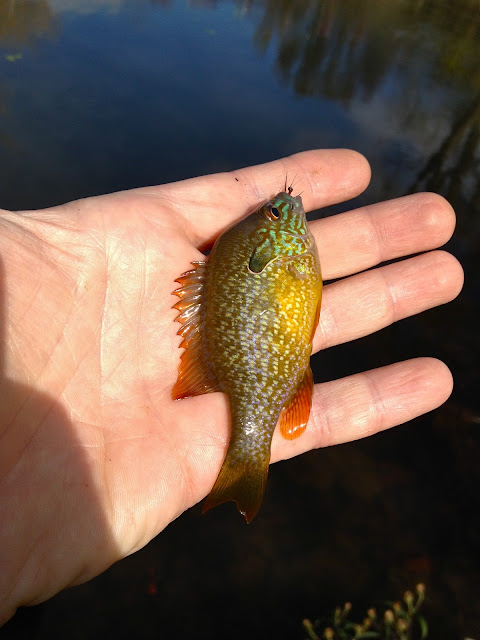 Although none of the fish were very big, and the rod I had was way over gunned for them ( I could have easily handled a 3-4 pound carp), I still had a blast! It is a fun place to go and catch a few fish. Next time I'll have to bring some non-traditional (for tenkara that is) flies and go after the Smallmouth bass that are reported to be in abundance in this river. I know this rod could handle them, for sure!