Ever have one of those days when the water you are fishing is so clear, and the sky is so sunny, that catching trout is almost futile? As you approach a section of water you can clearly see your quarry and that means it can see you too!

That was the kind of day I had Friday. The sun was out full, only a few clouds were around but they were thin,  and the water surface was undisturbed as there was no wind. The trout were rising to a light beatis hatch and there was a pod of trout working an area of slick water that caught my eye.

I stalked slowly to where I was directly opposite the pod and then carefully entered the cattails. As I moved like a heron (with the smell of rotting vegetation wafting up from the mud), ever so slowly so as to not make ripples, and keeping low, I got within 20-25 feet of the pod. These fish were slurping the BWO duns as they floated overhead. I could easily see those little "sail boats" floating on the glassy surface and then see big noses break the surface and suck them under. 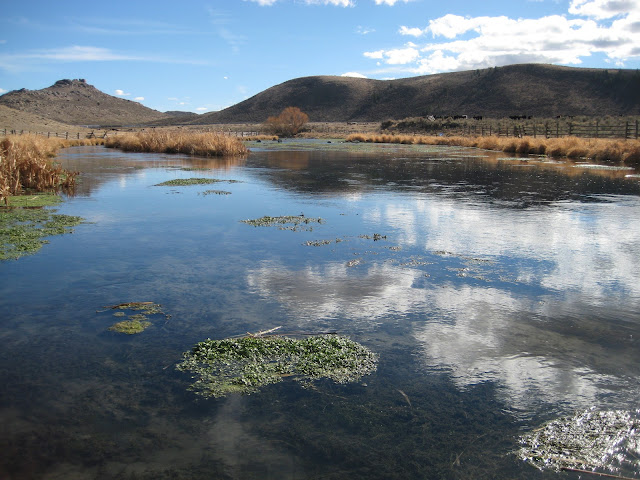 I tied on a #20 Barr's BWO Vis-a-Dun with a trailing shuck and attached it to 3 feet of fluorocarbon 5X tippet. This was attached to 12 inches of 2X fluorocarbon tippet and this to 18 inches of 0X tippet. This "tapered leader" was tied to a Vetterli 20 ft tapered furled fluorocarbon line. I greased the last 6 feet of the furled line and cast it with the Hirame-ML-3909.


The Vetterli line casts well and carried the long tippet section out towards the fish without much effort. The other thing I like is that if you modify your cast stroke, and make it more like a western rod's -- 10 to 2 rather than 9 to 1 for tenkara -- the line lands amazingly soft, not spooking the fishing.

Well, I cast to specific fish in the rear of the pod. The sun glaring off the water made it difficult to see my little fly, but as it passed over the smutting trout I felt that I should lift the rod tip. Sure enough I had him! It shot upstream into the rest of the pod, then downstream, and then back upstream. I kept the rod tip high for tippet protection and put most of the fish's pressure on the top, most flexible part of the rod. After a few minutes I was able to hand line him in to my net.

He was a 19" Yellowstone cutthroat. He was healthy and had a nice weight to him. I had some trouble taking him picture because my arms was not long enough to both hold him and take his picture! 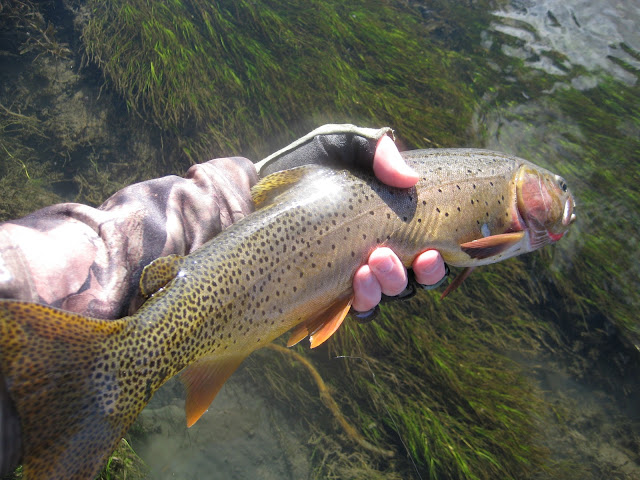 I released him back into the water and he swam slowly away towards the center of the stream. Need less to say, since he scattered the other fish in the pod I didn't get any other shot at more fish. They were put down.

Still, it was a nice few hours on the water. Hopefully next visit the sun will cooperate and be behind clouds, better yet, maybe a soft drizzle could be ordered so that I might have a better chance to sneak up on these very skittish fish. We'll see.