Wind and Water Conspire against Me -- video

I fished one of the more local rivers this past Monday and it was somewhat frustrating. The snow is just starting to melt and thus the river water is starting to rise. I have made it a goal to try to fish the entire lower section of the river this winter and I'm almost there. The sections left are higher gradient and deeper wading. This could get interesting as the runoff begins over the next couple months.

The water wasn't the problem though -- it was the wind. Normally, I am pretty protected down among the trees, but Monday the wind was swirling creating difficult casting and line control issues. I started out with a new rod that I am reviewing and casting a #3 line but the wind just blew it all over the place! Then I switched to my Daiwa LT36SF, a #4 line and a heavy fly. This was better but still the wind would kite the line. I didn't have my wind line with me as I thought I had so I couldn't use it. A combination of water and wind made it a less than productive day. I only caught 4 fish; two I netted and the other two were long line released just before netting. One of those was a large whitefish. He was probably 16 inches -- very heavy and a strong swimmer. 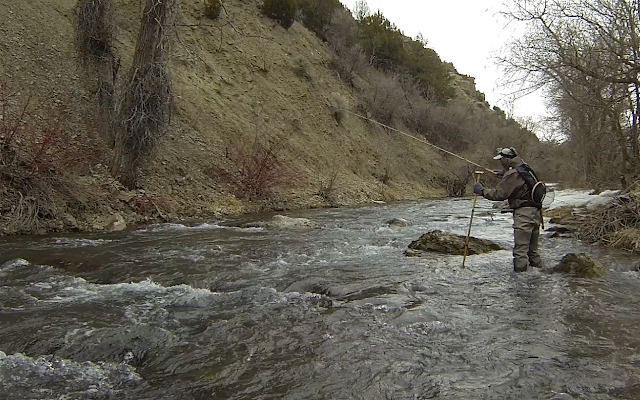 I really don't have much to say since it was such a frustrating outing. I did learn a lot though. I guess it is the frustrating sessions that improve our skills -- at least it is for me.

Here are a few more pictures.


I am not yet done with this river for the winter, but the water from here on out looks really challenging. It will test me and that is good. I just wish that while I'm being tested I can catch a few more fish!

Here is a video of the outing. Not too many fish, but you get to see me in this one for what it's worth.