Pure Strain Missouri Trout -- who would have thought!

These past few weeks I visited my daughter, son-in-law and grandchildren who live in the Wal-mart state. Usually while I'm there I fish the local streams for warm water species such as panfish, bass and carp. This trip I did this again. That is, until the super cell thunderstorms dropped 3 inches of rain and blew out the streams! 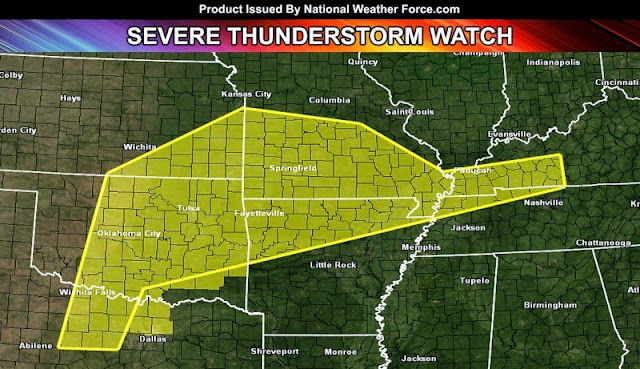 I thought I might fish the White River, since it can be protected against rain accumulation but it even was on the rise. I've never fished the White River system, but I've always wanted to. Its large enough, and complex enough, that I'd probably go with a guide the first time, but I didn't arrange that this trip.

Instead, I drove into southern Missouri to fish a small stream reputed to have the last pure strain of McCloud River rainbows. Even the McCloud itself doesn't have pure rainbows anymore, but this little creek, in this middle of "where the heck am I" Missouri does. The creek is Crane Creek and I was very excited to go.

Here is some narrative I stole from a website regarding Crane Creek: "Acclaimed as one of America's 100 Best Trout Streams, Crane Creek offers a truly unique trout fishing opportunity just forty-five minutes southwest of Springfield, Missouri.
Crane Creek is one of the few streams in the region with self-sustaining populations of wild trout. These local trout are the descendants of California McCloud River rainbows stocked in the stream in the late 1800s. Opinions vary but there are those that say Crane Creek Rainbows are the only pure-strain McCloud Rainbow trout left in the world!
Crane Creek Rainbows are often a revelation to anglers who are accustomed to fishing for stocked trout: they are quick and skittish and may be the ultimate trout fishing challenge Missouri has to offer.
Catch any trout in Crane Creek and you've accomplished something...land a big trout in Crane Creek and you can consider yourself to have a Ph. D. in trout fishing!"


After driving for a while through Missouri (on some days pronounced "Misery"), I came to the little town of Crane. I had previously decided to fish the middle section of this creek, so I parked at the city park. The weather was beautiful -- 62 degrees F and bright blue sky. As mentioned above, Crane Creek trout have the reputation of being very skittish, so I could have done without the bright blue sky, but hey, any summer day in Missouri where the air temp is 62 degrees is a beautiful day!

As I said, I chose to fish the middle section. From the previous website:" There are over four stream miles of public access to Crane Creek. These are detailed in the maps section of this website, but they can be divided into three sections:
All of these areas hold good numbers of trout, ranging in size from fingerlings to whoppers. Parts of the Upper Wire Road area go dry at certain times of year, but the City Park and Lower Wire Road sections run year-round and there are big trout lurking in the deep pools. "


I geared up and headed downstream. As I walked, I could see the creek through the trees. The water was very clear and seemingly undisturbed by the recent thunderstorms -- good sign! The creek appeared to have a gravel bottom with some shallow runs interspersed with deep pools. It looked very nice! I had with me one of my favorite rods, my Nissin Pro Spec 2-way 360 7:3. To this I had attached a 10 foot #3 line with 3 feet of 6X fluorocarbon tippet. I had decided that my first fly would be a #10 Utah Killer Bug. 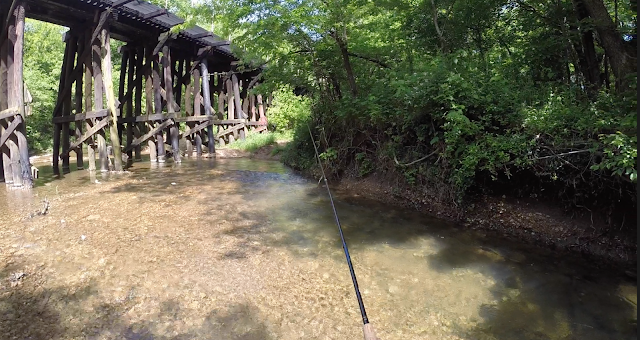 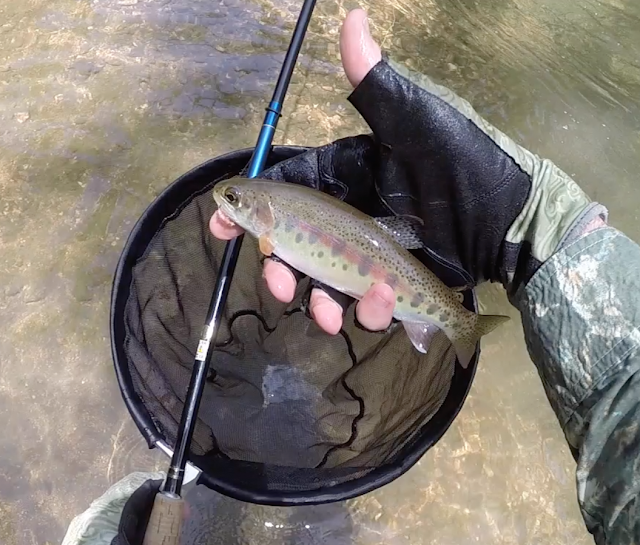 I entered the water and started fishing a likely spot around a log jam. Sure enough, on about the third cast I got a hit, but I missed it because I was looking around at all the pretty scenery. I moved up to a riffle-run that was tight against the bank and "BAM", I had my first fish. It was small, 6 inches, but very pretty and healthy. I took three more from that run.

I fished my way upstream taking fish from all the likely spots. None were very big; the largest might have been 9 inches. All of them were genetically pure wild silver bullets, though! As soon as they were hooked they shot off for any cover -- these fish are great fighters. I would have liked to hook into a 12-14 incher -- that would have been a great challenge. 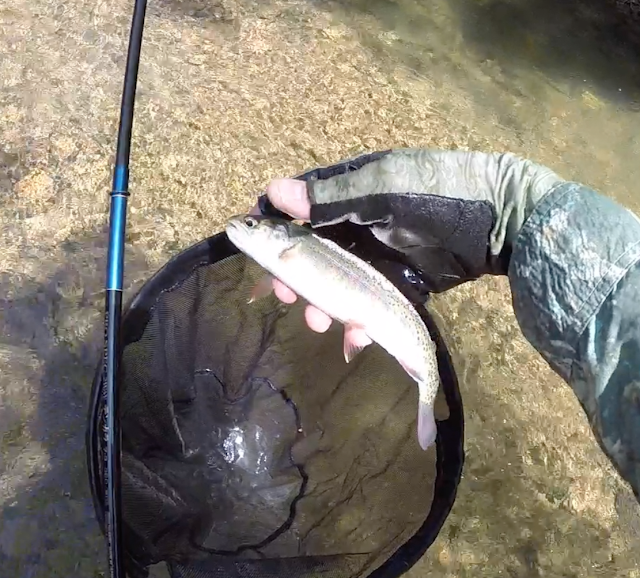 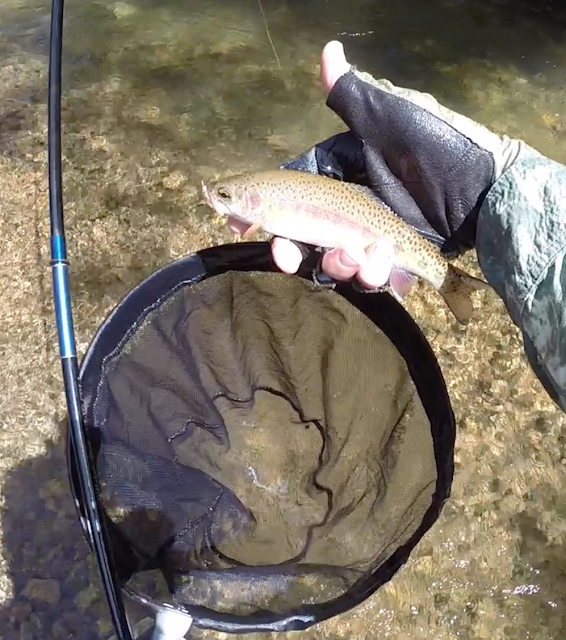 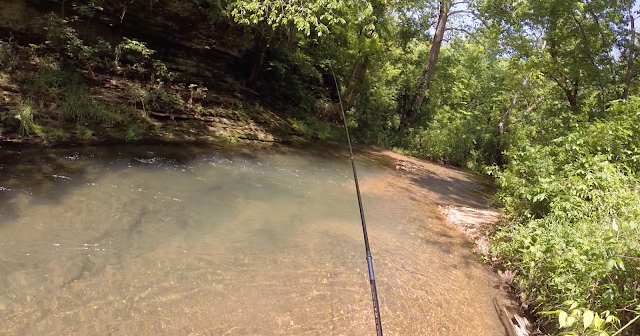 There are a lot of trees surrounding Crane Creek but they are much less closed in than compared to what I usually fish in the west. A 360 cm rod worked well.

I did find the fish to be very skittish. A combination of the clear, shallow water plus the bright sunny sky made any movement of the rod a warning sign to the fish, and they were gone! It was best to stand in the shadows and cast as stealthily as possible. I even used the sling shot cast on occasion -- not because of low lying tree branches, but because it uses less rod movement in getting the fly to its target. 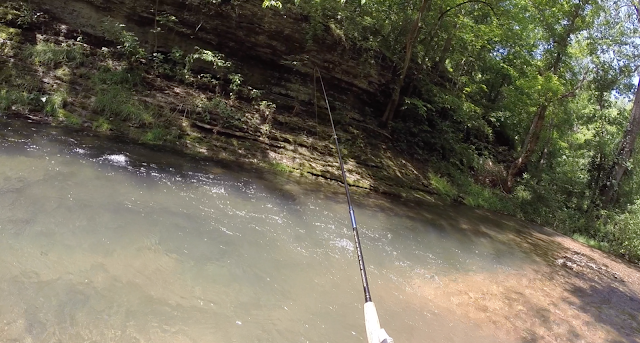 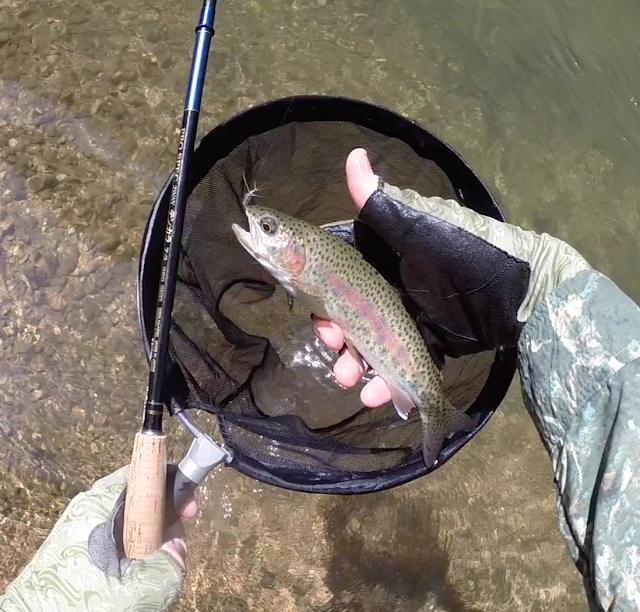 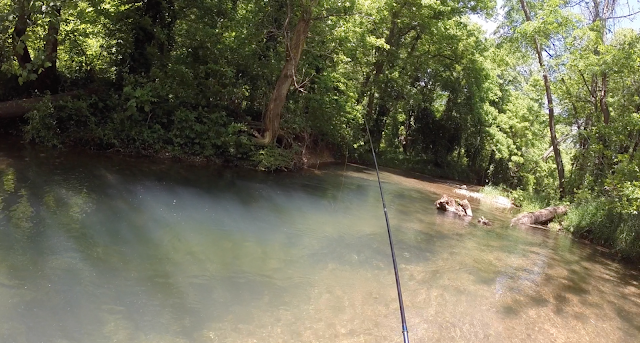 I fished for my usual couple hours, then headed back to my daughter's house. It was a great trip and I count it as a successful sortie into unknown territory. 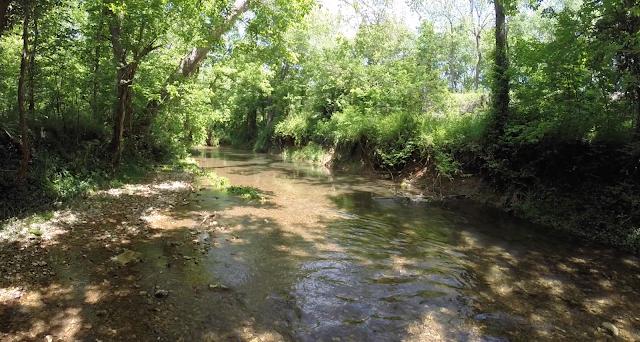 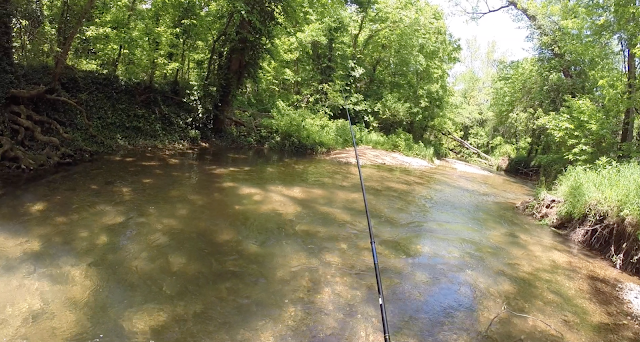 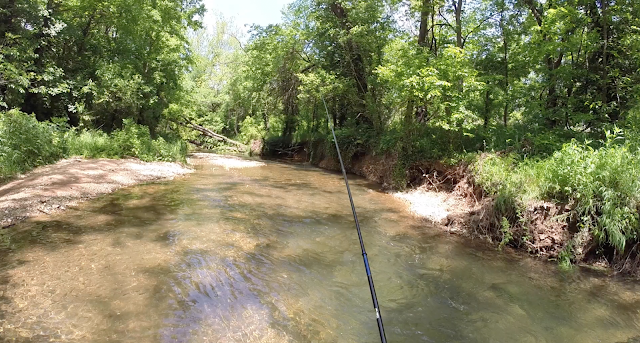 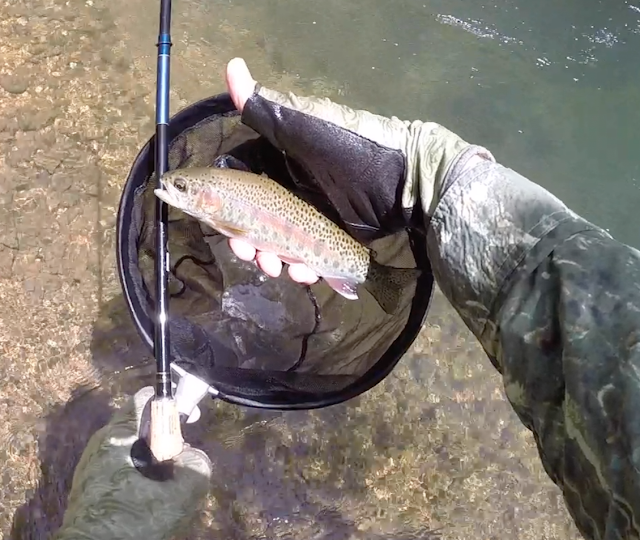 I'll be back to Crane Creek, for sure! I'd like to spend some more time exploring the other sections of this surprising spring creek, which is hid in the middle of no-where Missouri. 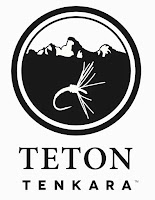