The much maligned Mountain Whitefish

As I drove up Blacksmith Fork Canyon today it was raining. The tops of the mountains had a dusting of new fresh snow and the river was trying to rise to its usual spring levels. The water was modestly high and somewhat off colored, but by no means the usual spring torrent. This winter didn't pack much snow into the highlands so run-off has been lackluster so far.


I stopped along side the road pretty low in the canyon and decided to plunge in. The river is about 18-25 feet wide at this reach and strewn with rocks and boulders making pockets of excellent holding water. I waded with a wooden staff this trip as my Simms folding wading staff didn't handle the current last time. The wooden staff worked much better and offered a more solid support against the buffetings of the current.

I decided to use the Tenkara USA Ebisu. I'm sure that some would have selected a longer rod but I am still trying to control my casts and keep them out of the riparian foliage. My line was 4.5 Tenkara USA HiVis fluoro with 2.5 feet of 15lb red Amnesia on the end. The length was 10 feet, to which I added 2 feet of 4x fluorocarbon tippet.

Since the water was somewhat off colored I decided to go with a large Utah Killer Bug {UKB} (#8 TMC 2302) with a New Zealand-style dropper of a #14 beadhead Prince Nymph.

I was into my first fish within minutes but I lost it because it caught me off guard. The is a common occurrence with me. It usually takes me a few minutes to get warmed up before I am on my game. Anyway, within five more minutes I had taken another. It was a little 10 inch Brown. He wanted the UKB.

Next was the Prince Nymph's turn. Two fish in a row. Another Brown and then a Cutthroat. The Cutthroat had beautiful slits and was getting into its spawning colors. 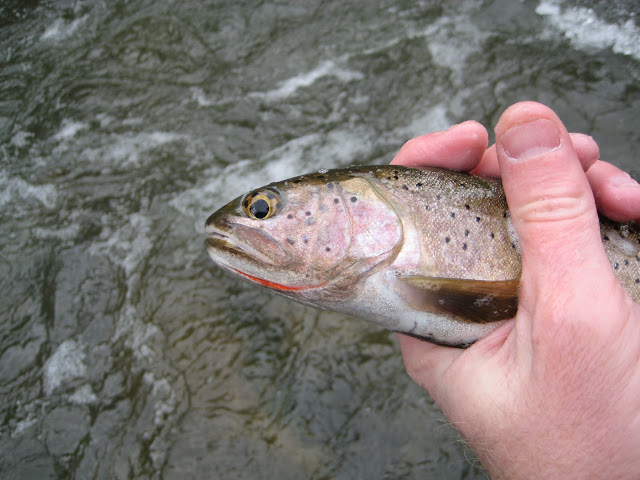 As I approached a nice hydraulic I thought I could see some large fish holding against the bottom. Maybe what I saw were just logs ready to snag me, but then again -- did they move?! First drift over them produced nothing. Send, third, forth, the same. Then on the fifth a sharp pull on the line and fish on! At first I thought I was into a really nice Brown, but then I noticed that the fish was more grey than yellow and although it did fight quite well it did not fight like a trout. As I pulled it to the surface I noticed it was a Mountain Whitefish! Ah bugger!

What is it about Mountain Whitefish, called commonly just "whitefish"? I know many fisherman hate them. They curse them. They feel less of a sportsman for catching one and act like it does not "count".  I have seen other fisherman laugh and jeer at their buddy when he catches one. But why?

Mountain Whitefish are native to the northern Rocky Mountains. They are a member of the Salmonidea family, as are trout and salmon. They tend to feed lower in the water column than trout but will rise to dry flies on occasion. They have small mouths with overhanging snouts and they tend to be much more scaly than other salmonids. Most importantly however, they have been shown to be a indicator species and thrive only in healthy mountain river systems.  When the river losses its whitefish then the trout are soon to follow; it is a sure sign that the ecosystem is disturbed. Whitefish are the mountain streams version of the canary in the coal mine. Maybe I had better be more grateful for them when they take my fly.

I caught two whitefish today. Both were about 16 inches or so. And though they didn't fight like a trout of equal size, they did their best to entertain me. The Ebisu handled them easily. BTW, both took the Prince Nymph. I don't think my big UKB would have fit in their mouths anyway!


All in all, it was a successful day, that ended up sunny; 13 trout to hand and 5 or 6 long line released. Also, two whitefish (do they really count?).  I lost the Prince Nymph twice but I ended up with my original UKB. I will definitely use it another day!