A few weeks ago, my family and I were in Salt Lake City to do a little shopping and eating. Early in the afternoon, when there was a respite, I asked if I could have a few minutes and head up one of the nearby canyons to check out the water. Both my wife and my youngest daughter rolled their eyes for they knew that I had ulterior motives.

We drove up a ways and stopped at a likely looking spot. I got out, donned my waders (which I just had happened to have hidden in the car) and rigged up the rod. That day the water was pretty high, run-off being in full swing. I fished for just a few minutes, then after nearly being swept downstream I jumped back in the car and drove further up the canyon. Cars were parked on the side of the road everywhere -- after all it was a beautiful day. I looked carefully but I didn't see anyone else fishing, so I assumed that all those people had to be hiking, picnicking, or something other than fishing.

As we approached another good looking location I pulled off the road. There was one other car there.  I didn't see anyone of the water so I worked my way over the edge of the road and down into the willows that lined the stream.

As I forced through the willows I suddenly heard a voice -- someone had yelled. I looked up and there, about 25 feet in front of me -- was another angler releasing a fish. I'm a solitary fisher, I don't like to see anyone else on the water, so I started to turn to leave when I suddenly saw that this fellow had a tamo! I stopped dead in mid turn and watched him. He released the trout and then started casting. Yup, he had a tenkara rod!

At this point, fighting my isolationist self introverted urges I decided to call out to him and say hello; after all we were comrades in tenkara. I stepped forward out of the willows and called "hello". He looked up and returned my salutation then noticing my wading staff he motioned "wait just a minute". After a few more casts he came over and we introduced ourselves.

He was Jerry from SLC. He has been fishing tenkara over this past year and per chance he had actually watched a few of my YouTube videos -- that's how he recognized my wading staff. We had a pleasant chat, shared tenkara anecdotes, compared equipment (I had a rod new to me that I was reviewing so I let him fish with it for a bit) and talked techniques. It was like we knew each other for years! I must admit it was pretty fun!!


When we departed we exchanged emails and promised to fish with each other another time.  Well, it was just a few days ago that I received an email from him that he was going to be up in my part of Idaho for business and did I have time to go fishing. I emailed a "yes" and we made plans.

I met Jerry at a predetermined location and then drove him to one of my favorite little mountain streams.  We fished for a few hours, both catching rainbows and wild native cutthroats. He fished a section of the water while I went downstream and fished another. After a while we walked side by side up the stream, he fishing the right side and I fishing the left side of the water. It was fun. While wading and casting we talked, compared techniques, and helped each other when our flies got hooked in trees or on submerged logs. 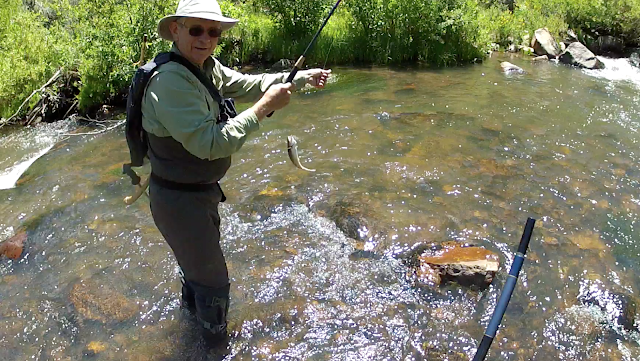 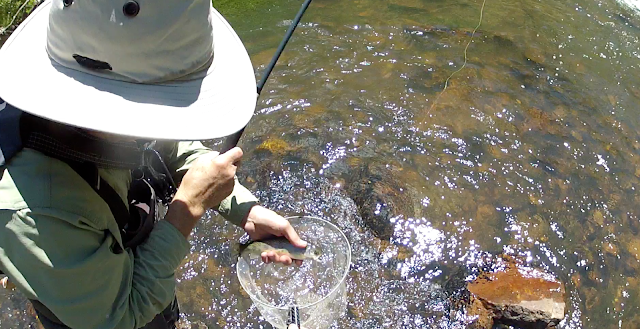 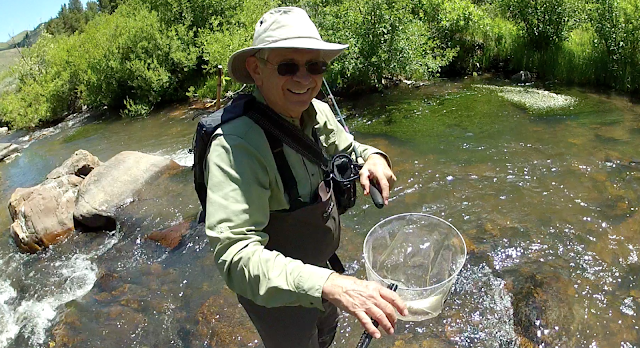 I had a previously arranged commitment that I needed to get back to so we couldn't go for more than 3 hours, but I thought the time we fished was great fun! I had somewhat the advantage since the water we fished was my home turf. Next time I'll have to go to Utah and fish with him on his home waters so I can be the one new to the water.

So here's to Jerry!  Thanks for a fun trip! Let's do it again sometime. I'm glad I ran into you on the water in Utah. If you were western fly fishing I would have slipped back unnoticed into the willows and moved upstream a ways. But tenkara changes that. When I see another tenkara fisher I now just have to say "hi".

BTW, Happy Father's Day to all of you male tenkara comrades out there.